In 2017 YCRS and its sponsors teamed with our prized pupil Anthony “Mazz” Mazziotto to get this young phenom on the MotoAmerica grid. And it paid off: Despite very limited bike mods, Mazz grabbed five podiums and

two wins in his 600 Superstock debut season.  Thanks to the support of Yamaha, Markbilt Racebikes, Cambr Digital Banking Platform, Yamaha Generators, YamaLube, N2 Track Days, SBS Brake Pads, MotionPro Tools, Yamaha Genuine Parts, Woodcraft Technologies, Scott Powersports, and Dunlop Tires, the inaugural season for YCRS as a title sponsor for a team was a success.  The only riders to beat Anthony in 2017 were veterans of the 600 class with high-budget bikes and teams.  To say we were proud, and that Mazz is gifted, are both understatements.

For 2018, the challenge is higher.  With no more SuperStock class for up-and-coming racers to get their feet wet in a less-expensive class, the team will need to compete in SuperSport.  SuperSport is where the big boys play so the challenge is high…but Markbilt is already hard at work building a competitive bike.  Without budget for fancy electronics or winter testing the team will be climbing uphill, but the rewards are worth the challenge: Anthony has the potential to be one of the top racers in America.

“It’s going to be interesting,” said Anthony III.  “We’re going in with a basically stock school bike and competing against the big boys so our chances are slim.  Also, it’s my senior year in high school so I couldn’t afford days away from school to test over the winter.  On the other hand, we’re going to approach the season differently by having fun and learning as much as we can.  Often, when there is no pressure or crazy expectations, I relax and ride better so I plan on fighting for that podium every weekend with a smile on my face.  Keith(Culver) always jokes that a smile is worth a second.”

Keith Culver, coach and team manager: “We think a podium this year would be the equivalent of a win last year because the competition in this class is amazing and the fight for the podium will be one for the record books.  We see something in Anthony which is why we’ve been pushing so hard to find support for the program.”

Coach Chris Peris adds, “Mazz is the full package: talent, speed, drive, passion, and even his marketability.  We’ll give this a go for another season and see where it takes us. Last year we surprised a lot of people so let’s keep it rolling.”

YCRS has instituted a weekend sponsor program that was originally for Yamaha dealers and is now open to all. Each weekend sponsor gets a VIP Yamaha Champions Sportbike Demo with their local track day, a Yamaha Champions Riding School two-day ChampSchool, and a 10×10 space with the team inside the paddock to setup and promote themselves.  Starting with Freedom Powersports in Atlanta, dealers have stepped up to support the team in Virginia, Pittsburgh, New Jersey, and Laguna Seca.  The team will open up this program to non-Yamaha dealers and still seeks support for the Sonoma, Road America, Barber, and Utah rounds.  Interested parties can contact Keith Culver at 732-267-3699 or keith@champschol.com for details. 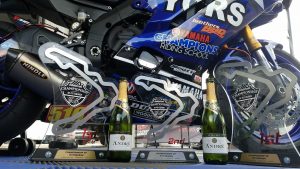 YCRS chief instructor Nick Ienatsch closes with, “The YCRS team and our sponsors have a passion for this sport. Riders like Anthony work hard on their craft and we can provide valuable support…and we all remember how much help a little support can be. Go Mazz!”

Want to ride really well for a long, long time? Master the brakes. “Sure,” you say, “that’s a great idea. But how and what do I practice?”
We include this Braking Practice class for several reasons: 1-Poor braking practice can be painful and we’ve seen riders crash with poor technique 2-Our motorcycles stop really well when properly operated, better than most riders can believe  3-“Practice makes permanent” and following this braking-practice regimen will set you up for a life of confident and consistent brake use.

We hear and read crazy things about a motorcycle’s rear brake, but since motorcycle designers attach them to every bike from MotoGP machines to scooters, it makes sense to learn to operate them effectively.
This class looks at proper use of the rear brake and how that use differs depending upon bike wheelbase, front-brake use, bike load, and pavement conditions. It’s easy to think that “brakes slow me down”, and while that’s true, the rear brake is used by experts to slow the bike…and the weight transfer. Let us show you how and why.

The first three Champions Habits focus each rider on the priorities of safe and fun motorcycle riding, and these three core approaches reside under an Umbrella of Direction. In other words, everything we do on our bikes serves to get the motorcycle pointed in the right direction prior to accelerating, whether we are leaving our neighborhoods on the way to work, enjoying a Rocky Mountain canyon, or competing on the track. The skills and approaches taught at ChampU will make life-long street riders and championship-winning roadracers, but all those mental and physical tips and lessons reside under this single main goal of every great rider: motorcycle direction.

Our third core Champions Habit examines the direct effect that our bike’s speed has on our cornering radius, and how each rider can exactly control speed during every inch of every corner with accessible techniques like trail-braking awesomeness and neutral throttle mastery. R=MPH examines the main safety issue that plagues our sport, running wide in corners, and draws a clear and understandable approach to any corner, from intersection left turns to backroad sweepers to racetrack hairpins. Understanding how speed affects radius plus learning how to apply these bike-control techniques in every corner is key to safe and enjoyable motorcycle riding.

It’s easy to spin off into theoretic studies of tire hysteresis and asphalt compounding in an effort to understand traction, but before your eyes glaze over let us tell you that grip is much simpler to understand and manage while onboard your bike: welcome to our second core Champions Habit. Our tires have a finite amount of traction, a scale that slides based on understandable factors like pavement condition, tire temperature and wear, and rubber compound. We, the onboard engineers, manage traction by how we load and unload each tire via the bike’s controls. We are constantly trading throttle percentage points, brake points, and lean-angle points to retain traction during every ride on any bike.

New riders are often surprised by the amount of mental concentration necessary to survive and thrive on two wheels, and not just on the racetrack. Street riding requires as much or more focus and our first core Champions Habit asks everyone who decides to ride a motorcycle to be “all in” mentally. In fact, we encourage every rider to increase their mental focus in every aspect of their life so that their “focus muscle” will be ready when it really counts: on two wheels. The mental approach of champions instructs riders to get focused pre-ride, refocus during the ride and immediately get over any mistakes with a mantra and a “what’s next” attitude.

We watch our racing heroes hanging radically off their bikes, but how does that pertain to us? What should we do on the street, on the track, and why? What’s more important, lower body or upper body? Where should our feet be? We’ve got questions!
As we delve into the how and why, we also examine the when. When do we move our weight onto the footpeg, when do track riders sit up or tuck in, when should our heads be the lowest during track riding? Bring us your questions, we’ve got solid body position answers.

Our car, truck, van? That’s a four-wheeled practice motorcycle that provides a relatively safe place to practice riding. Think of steering-wheel angle as lean angle and use every drive to focus on the blending of brakes, throttle and steering.
We can practice great vision habits of scanning out and back, practice placing our “bike” safely in traffic, practice the smoothness of initial acceleration, braking and steering. Who would have thought that driving those silly cars could be so enlightening?

The primary reason to downshift is to put the bike in the gear we need for the future. That could be for a corner exit, to pass a car, to climb a hill or to get the bike back to first gear before leaving a stop.
A secondary benefit of downshifting is to increase engine braking during deceleration, but for significant slowing the brakes are a much more efficient, repeatable, and affordable option.
We are often downshifting while braking and this class walks you through the timing and process of this operation, an operation that includes a rev-match to smooth the clutch engagement in the lower gear. This “blip” of throttle prior to clutch-lever release is the mark of an expert rider and ChampU gives you the steps to expert downshifting.

“I just love this corner!” Some turns just feel right and this class provides solid science to help riders love every corner by creating “great” steering geometry.
Yes, we are in charge of our steering geometry with brake or throttle use, so examining where our fork travel shoud be at the corner’s turn-in puts additional trail-braking information into our riding tool box. We rely on data acquisition for this class but riders don’t need a data system, they need to realize how a motorcycle turns best.

Pointy End of the Cone Description

Crashes don’t happen on perfect days, riding slowly on roads we know on a bike we’ve owned for years, they happen when we are surprised by circumstances and don’t have the skills to adapt. Welcome to “Pointy End of the Cone Drill”, another of ChampSchool’s ever-changing real-world drills.
In this challenging drill, instructors lay cones on the track and riders must place their bike to the pointy end of the cones. And they change every lap!
We struggle in this drill when one (or more) of three failures arise: 1-We quit scanning out and back and out and back with our eyes 2-We quit using our brakes effectively, especially at lean angle 3-We quit moving our bodies to help direct the motorcycle. Eyes, Brakes, Body: The secret to thriving in challenging real-world circumstances…and our pointy-end drill.

Spend a few minutes in this class to learn how to fit our bikes to our bodies. Motorcycles come off the assembly line or out of the dealership with settings that could get in the way of our riding enjoyment; let’s take advantage of all these adjustments!
That used bike we saved for and finally brought home might not “fit” us, but with a few tips from our Crew Chief Keith Culver, we’ll make it our own. We included this lesson because we adjust ergonomics for students at almost every school, making them more comfortable in just a few short minutes with basic hand tools.