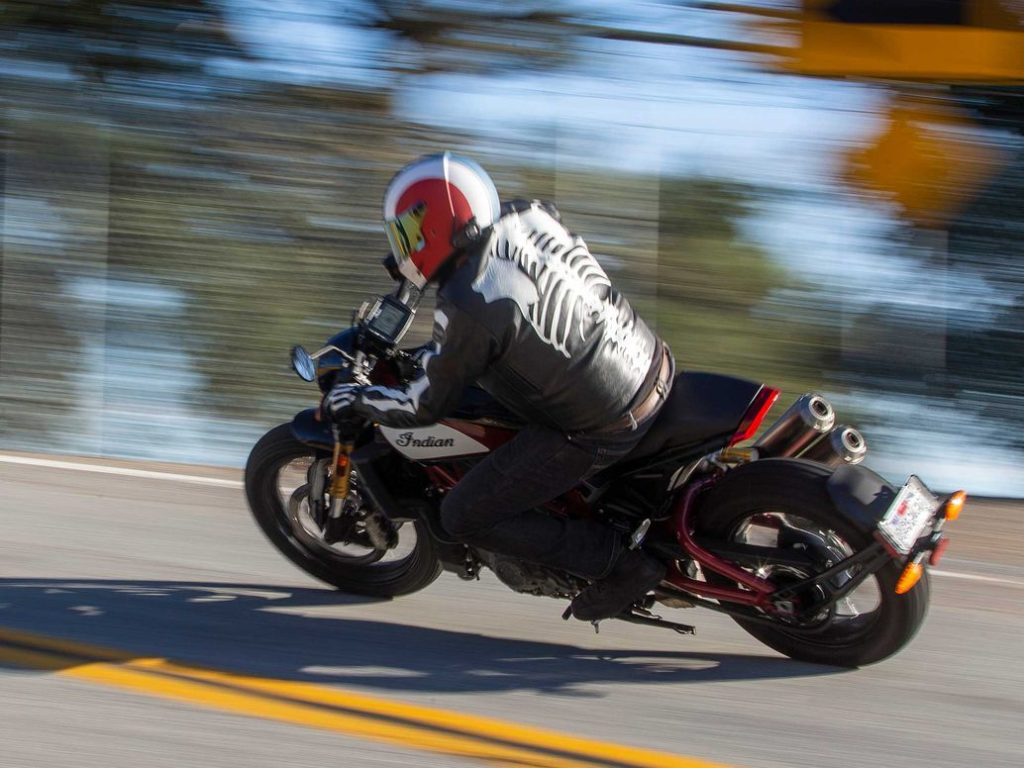 Properly braking for a corner is the key to going quick while being safe. Check out the illuminated taillight as the rider trail-brakes into the corner. – Jeff Allen

Welcome to 2021, the year of the brake light. Lighting the red light at the back of your bike is much more than a sign of braking; the more I ride, race, and coach, the higher braking expertise rises in my safety and speed priorities.

Yes, safety. Braking expertise adds safety in terms of consistent midcorner bike placement and the ability to stop your bike efficiently anywhere, even midcorner if necessary. There’s even more, so tune in next week please.

Speed on the street is a touchy subject so I refer to track lap times, but we all realize how fast some riders go on public roads. The leading killer of American riders is running wide in a curve, and those deaths are not caused by entering corners too slowly.

There are speed limits and it’s illegal to ride above them, but no preaching here; let’s simply recognize that riders enjoy the feeling that a twisted throttle brings. I don’t care how fast you ride. My interest is in helping you control the speeds you choose.
On the street or track, each curve has a maximum midcorner speed at the lean angle you choose. You’ve chosen this lean angle because: A) It’s raining. B) You’re brand new and scared to lean over further. C) Your pipe and/or undercarriage drags at this lean angle. D) You’re on a gravel road. E) Your tires are brand new. F) Your tires are completely worn out. G) You’re an A-group trackday rider at the edge of grip on hot slicks. Whatever the reason, you have a maximum lean angle.
For example: At the lean angle you choose, your bike will negotiate a particular curve safely at any speed below 34 mph. At 35 mph your bike runs slightly wide. And 36 mph makes it worse, and in another one or two mph your bike is out of its lane, into oncoming traffic in a right-hand corner, or into guardrail, trees, off the cliff in a left. Stack another 15 mph on top of that and the bike hardly even turns before it exits the lane. It’s a massive crash and adds to the statistic quoted above.
If you’ve realized how safe most racetracks are to experiment with entry speed, your slight miscalculation of one or two mph just puts you off the apex and waiting to accelerate as your bike finally gets direction. The 15 mph mistake puts you into the grass with a fighting chance of surviving unscathed. If you fall down, mandatory safety gear helps prevent injury and an ambulance can be at your side within 60 seconds, called by corner workers who are now waving yellow flags. The word racetrack could be Latin for “great place for riders to experiment”; there’s a world of trackday providers waiting to welcome you into the fold.
Understand that the bike and tires do not know if you are running wide in a canyon or in the Corkscrew at Laguna Seca…and if you agree with that sentence, you must realize that the fix to the street or track problem is the same. Street and track safety are the same, with a difference in the application of body position and the nuances of traffic, because the bike works best with certain exact inputs on the way to work or on the way to the podium.

34 MPH at Your Lean Angle

We are back to the aforementioned corner with a maximum speed of 34 mph. When we approach the corner at 40 mph, simply rolling off the throttle and allowing engine-braking to slow us gets us below the 34 mph number. We are safe, but not particularly consistent because engine-braking is not adjustable or repeatable.

Next weekend, or the next lap, we approach the corner at 50 mph. We close the throttle earlier and snap off a downshift so the higher rpm of the lower gear slows us better. If we’ve done this in time, the bike slows to or below 34 mph. Safe this time, but for riders who want to ride with a sporting intent, we are going down the wrong path—a path that gets fatally treacherous in a great big hurry.
I add “sporting intent” because many riders are happy to ride around a racetrack without constantly pushing, or go street riding at or below the speed limits. These riders are under-represented in the crash statistics, but I will speak to them next week because their riding world can be even safer. This week is all about attaining consistency at speed.

It’s Not Speed. It’s a Lack of Control.

At this point we have survived the 34 mph corner as we approached it at 50 mph, just by closing the throttle and grabbing a downshift. Engine-braking has gotten us to or below 34 mph. But we have done it out of control because engine-braking is not something we can adjust, which defines control. 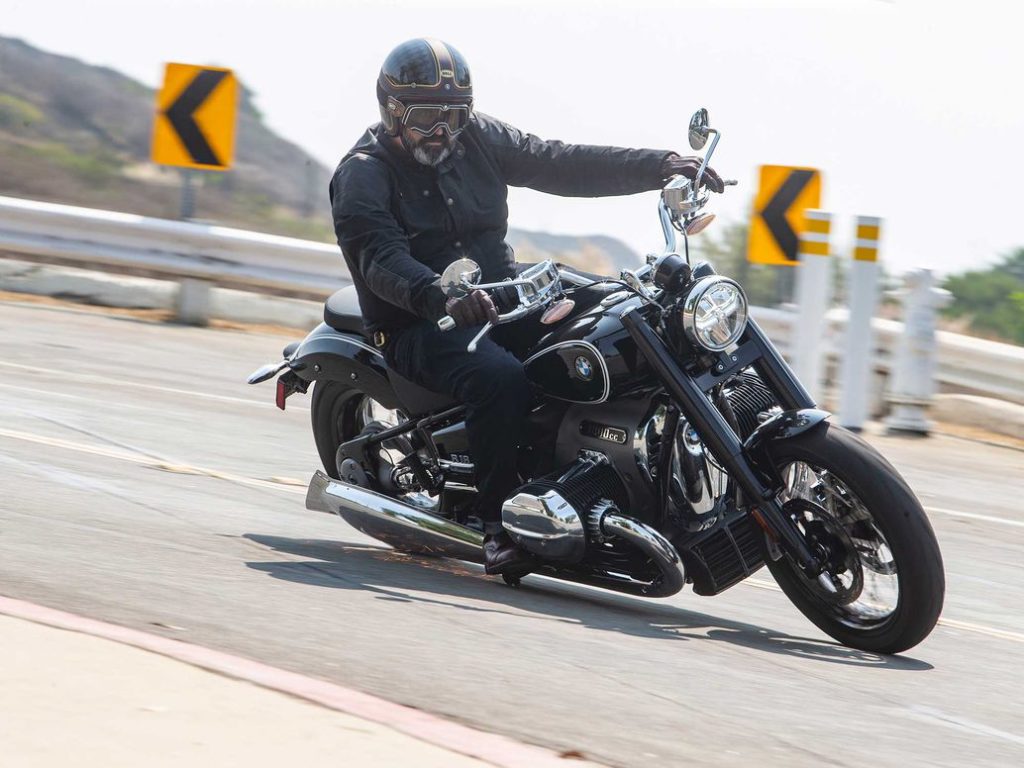 Every motorcycle has a maximum speed in which it can safely complete a corner due to many factors. Here a limited lean angle is a dominant factor. – Jeff Allen

We need brakes. We need to realize that we closed the throttle because our brains said, “Slow down to make that corner.” As we approach the same corner the next weekend or the next lap with more speed, say 75 mph, rolling off the throttle and downshifting will not get us to or below 34 mph. We need to roll off the throttle to the brakes, then downshift to put our bike in the gear needed for the exit, and also to help slow us. I’ve written a lot about which brake, but the best riders prioritize the front brake over the rear brake because it better controls steering geometry, and our gloved fingers have more feel than our booted feet.

In an instant of brake-lever squeeze, we have taken control of our corner-entry speed with a component that is adjustable and repeatedly gets us to exact speeds. Riders, this is the missing ingredient in the riding of so many YCRS students. They are trying to increase their speed with the hugely wrong decision of using less brakes. That is 100-percent incorrect.

The faster we approach the corner, the more brakes we will need to get the bike consistently to the speed at which our lean angle allows us to stay on line. Sitting there, you are hearing the truth of that message, yet riders are dying by running wide in corners. Knee-jerk reaction is that they are riding too fast, but in truth, these riders are failing to control the speed their acceleration produced.
In my job at Champ School I have watched slower riders run wide in corners even though they approached those corners 20 mph slower than my instructors. The instructors approached the corner faster and went to the brakes to control their speed and steering geometry, while the slower riders entered the corner with less mph but no control in place. No brakes. As they attempted to ride faster with that technique, they ran wider and wider, relying only on lean angle to make the corner. Is lean angle infinite? Are we all comfortable leaning over to 64 degrees like our GP heroes? No, and no.
Drama results not from too much entry speed, but a lack of controlling that speed all the way to the corner’s slowest point (nowhere near the turn-in, by the way) with trail-braking, which we call Brake-Assisted Steering. Big speed on the street is insane due to the number of uncontrolled variables, but outright speed is not the issue in the vast majority of “running-wide” crashes. It’s a lack of control, a lack of braking and trail-braking. 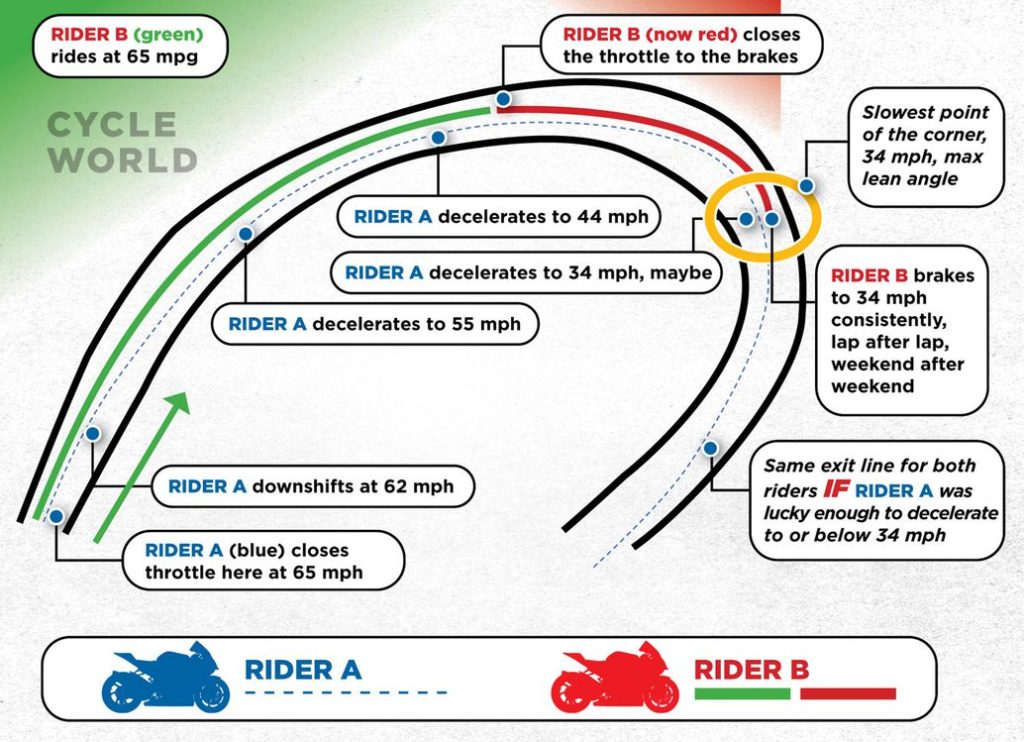 I’ll close Year of the Brake Light Part 1 with a long caption to this simple illustration of two corner-entry approaches. The speeds noted are street speeds, but the faster the speeds, the more this counts.

Rider A believes in engine-braking and closes the throttle at 65 mph quite early and then downshifts. This rider is hoping the engine decelerates him/her enough to make the corner, in this case: 34 mph at the lean angle they are comfortable with at the corner’s slowest point. As this rider tries to go faster, or the corner is tighter than expected, this style becomes increasingly more difficult; making the corner begins to depend on lean angle and hope. This approach is eventually scary and often leads to a lack of riding and a bike sale…if injury and death are avoided.

Rider B carries their speed longer into the corner because they have the confidence of slowing and turning their bike in less time and distance. They are significantly “faster” farther down the straight, but use the brakes to finely control their entry speed.

Rider B doesn’t roll off the throttle and hope the bike slows to 34 mph or less; Rider B rolls off the throttle and brakes to guarantee that speed. Because the brakes are an adjustable and repeatable control, this approach allows this rider to precisely match their speed, and thus their cornering radius, to every corner they encounter. Consistency and confidence soar. Lap times drop. It’s fun. It’s fast. It’s efficient. It’s safe. It’s trophy-winning. It’s industry-growing.

At the exit of this corner, Rider B accelerates because they plan to use their brakes for the next corner. Rider A’s plan to decelerate and hope in the next corner begins to severely limit acceleration, and enjoyment. Rider B is consistently faster but, as we’ll discuss next week, also safer.